First of all, I hope everyone has had a lovely holiday – however you celebrate or don’t celebrate. There’s snow here now, which is amazing; we’ve not had snow in ages. It also gives me the excuse to stay inside and get some studying done. 😉

I also have some non-Spanish related news: I finally finished Harry Potter und der Orden des Phönix! It’s over 1000 pages long in German (around 900 in Spanish, apparently), so it’s taken me since about the end of August to read it – which while that’s been four months, it’s not too bad, all things considered. I’m halfway through Flammender Zorn (Mockingjay) so I’m going to finish that before I go onto the next Harry Potter.

Spanish-wise, I’ve been making some progress. I’ve done a bit more FSI – but at this point it’s mostly pronunciation drills so it’s booooooooring. I do need to work on Assimil. I’m hoping I’ll get on that – mostly because my Kindle died a few weeks ago (it was an incredibly sad moment) but my aunt had a Kindle Fire she wasn’t using anymore so she gave it to me (which was an amazing moment) and I’ve found that in general, the Kindle Fire is much, much better when it comes to displaying PDFs. I’ve put a lot of my language books on there – and the audio files on my iPod – with the hope that I’ll be much more likely to use them on my commutes next year!

As the quarter-way mark of this challenge passed on Thursday, I decided as well yesterday, that it was probably a good idea to test myself on what I know so far. Now, this wasn’t a super-accurate test – I’ve been using memrise and duolingo pretty well but I know I’ve not been learning too much grammar or anything like that. Basically, I went to BBC Mundo and picked this article out of their top 10 most read. I copied it out (to practice spelling and generally getting used to writing by hand), went through and tried to understand it, highlighted the words I didn’t know (if I could work them out from context, but not on the first try, then I still highlighted them), underlined full sentences/phrases I couldn’t quite get and then without a dictionary, tried to translate or get the gist of the whole article. It’s only a short one, less than 400 words, but the whole process probably took a couple of hours. (The writing out takes the longest, I am so much quicker at typing!) 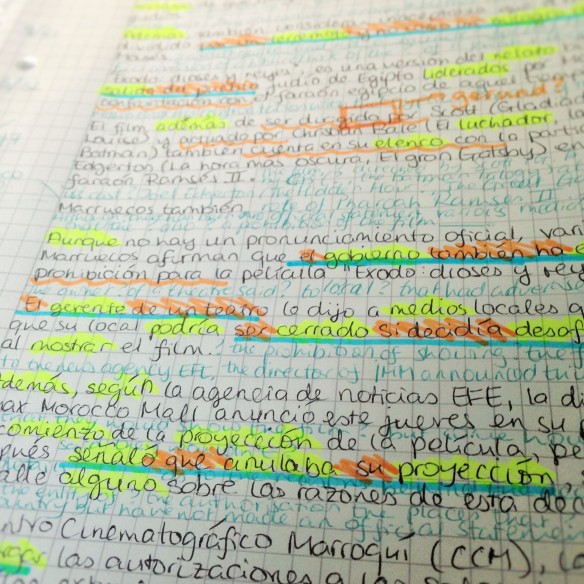 What I found was that I understood a lot more than I remembered learning. There are a lot of cognates and similar-looking words in Spanish and English, so as I read them or said them, I could usually figure out what they meant. There were a few words that came up repeatedly that I didn’t know (además is one and I did it on duolingo yesterday afternoon as well!) and there were a couple of sentences that I could vaguely figure out from context but couldn’t quite get the detail for. Overall, when I counted through the words, I knew around 89% of them – but although this is higher than I was expecting, it makes sense for a lot of reasons:

Still, I’m very happy with this so far. I’m going to think about how I’ll test myself halfway through the challenge, but this was good enough for now – and I know I’ve made progress in the last 27 days. (For instance, I learnt the word dirigir on memrise, which means to direct – and that came up in the article. I might have guessed it from context if I hadn’t learnt it, but I actually recognised it here, which was fun.)

How do you guys keep track of your progress? If you have any ideas, I’d love to hear them, because I’m not sure what else to do, really! Also, I don’t know if I’m going to update before next Thursday – so if I don’t, then a Happy New Year to you all!

(Edit: ooh, I almost forgot! So I’m learning Slovak for the uTalk January Challenge – and if you want to know why, then I got a chance to write about my reasons over on the EuroTalk blog last Tuesday. Check it out if you haven’t already!)