So, with my other languages when I’ve posted late, I’ve tended to reduce my progress down to just one post—but I took (some) notes on where I was at with Māori! Thinking ahead, for once. So, this is where I was at, six days in.

Okay, so I do kind of love Māori. Only problem is, it’s turning out to be way more difficult to find usable resources than I first anticipated.

I’ve got access to the uTalk Māori content, which is proving really useful for my pronunciation. I’m noticing that I’m having difficulty differing (in listening) between certain consonants—mostly ‘p’ and ‘t’—so this is really training me out of that.

I cannot for the life of me find a Māori textbook I can use. The one I’ve found that seems to be widely recommended—Māori Made Easy—is out of stock on Amazon at time of writing and has been for several weeks. And even if it wasn’t, it’s around £30, which is fine but a little on the pricier side of things. I think I’m just disappointed there isn’t an ebook version, since this seems to be the main textbook people use.

There are also plenty of Māori courses out there, which on first glance, are free, but turns out that’s only true if you’re in New Zealand or a citizen of the country. So, no luck for me—but if you are either of those things, do a quick google and you’ll find something! (Otherwise, at least one of them was around 2,500 NZD which… I do not have to spend right now, sadly.)

BUT, I did find an app, Tipu, which is free and seems to teach the basics of te reo. It’s got a little bit of grammar mixed in and audio, too, which I love.

Unsurprisingly, then, uTalk and Tipu were my mainly-used resources in my first six days with Māori. I held off on using Memrise at this stage, just because there was no course that seemed to fit an absolute beginner’s level.

In the first six days, I spent 193 minutes (3.22 hours) learning Māori. That averages out to 32 minutes (0.54 hours) per day. I didn’t keep perfect track of where I was on uTalk at that point but I’d delved into at least a few different topics.

Here’s my breakdown of time: 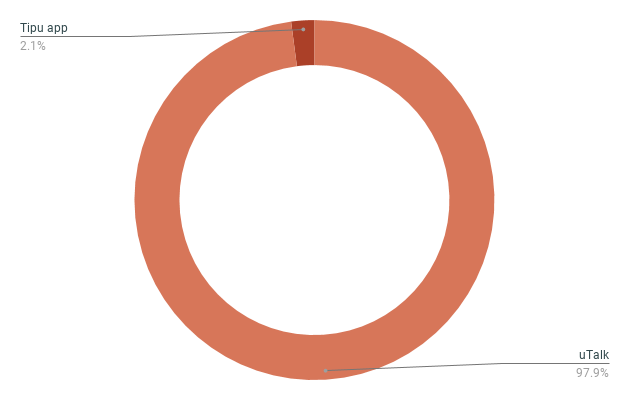 I’m also a member of a few Māori learning groups on Facebook. Everyone there seems to be at a minimum of an upper beginner’s level (they heavily recommend the Māori Made Easy textbook, especially when there are beginner’s questions) but it means that I do see some Māori daily when I’m scrolling through my timeline.

But yeah, that’s about it for my six-day update. I’ll be back with my twelve-day update in a little while!