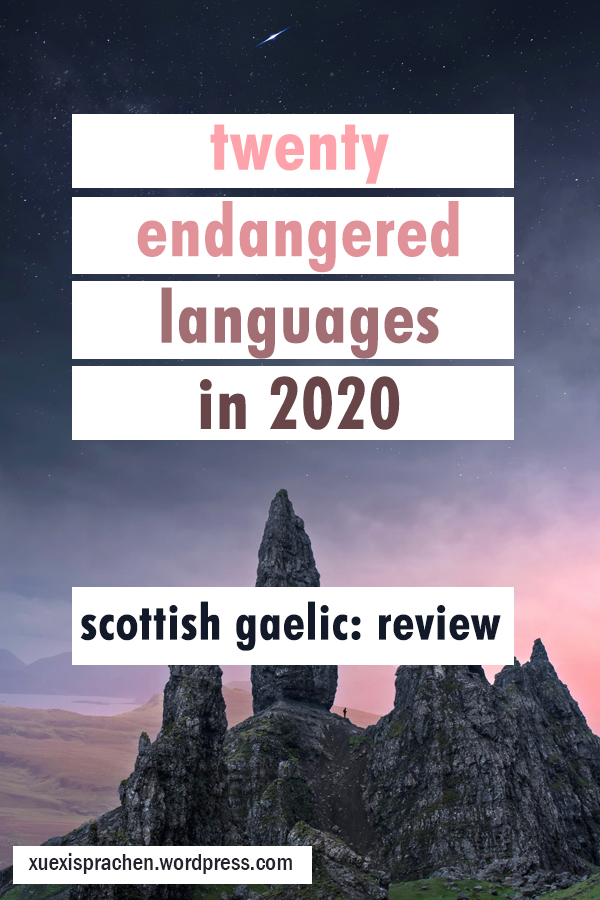 I’m at the end of my study time for my first endangered language of the year—which means it’s time to move onto something new! But first, what have I managed to learn in just eighteen days? How do I feel about learning Scottish Gaelic? And there’s even a little video for you all to see how I did!

On 1st January, I started learning Scottish Gaelic in earnest (I’d already done a little bit from November, but that was mostly Duolingo and it wasn’t consistent) as part of my 20 Endangered Languages in 2020 challenge.

In that original post, I said that I hoped to have a vocabulary of around 100-250 words, and have a basic conversation about myself.

And? Well, I think I’ve about done it! According to Memrise, I’ve learnt 304 words between the two courses I’m doing (so this doesn’t count all the words I’ve actually come across with the different resources I’ve been using) and I managed to make this (totally not awkward 😂) video today, where I talk a little bit about myself:

Yay! I had to check some new words (hadn’t actually come across ‘to learn’ before) but other than that, it’s almost all done from memory—so I can talk a little about myself and where I live, about family members and pets, and about things I like.

I managed to finish the first two chapters of Teach Yourself Complete Scottish Gaelic, which seems very comprehensive—especially since those chapters took me about five hours between them! Only 21 more to go!

I did six lessons from the beginners’ course on LearnGaelic, which proved to be a good way of reinforcing and expanding the vocabulary and sentence structures I’d learnt. There’s no Memrise deck for this course, sadly, so I might create one in future.

I’m also past the second checkpoint on the Duolingo tree, have done about 100 reps on Glossika (once I realised I could switch it to just ‘listening’ mode, it has felt more useful), and have spent time on the uTalk app, Clozemaster, and Anki.

It’s really been fun! Scottish Gaelic is one of the languages I’m adding to my main line-up this year, so it was nice to have a really focused introduction over the past ~three weeks. Admittedly, this week wasn’t the best one (it’s just been one of those ugh kind of times), but I still got a fair bit done and hit my minimum of thirty minutes every day.

I’m starting to feel like I understand how to pronounce things a little better (no mean feat when I’m not going to classes or talking to anyone but myself) and spell them, too, and I’m grasping the grammar better, too, which I’m surprised at, since word order, at a minimum, is very different to English.

I’ve studied Gàidhlig for 836 minutes (13.9 hours) over the last eighteen days, averaging out to approximately 46 minutes (0.77 hours) per day. That’s a little lower than I was averaging at the beginning but only by two minutes a day, so not that big a deal. I’m well over the nine-hour minimum I was targetting here.

Here’s a breakdown of all that study time: 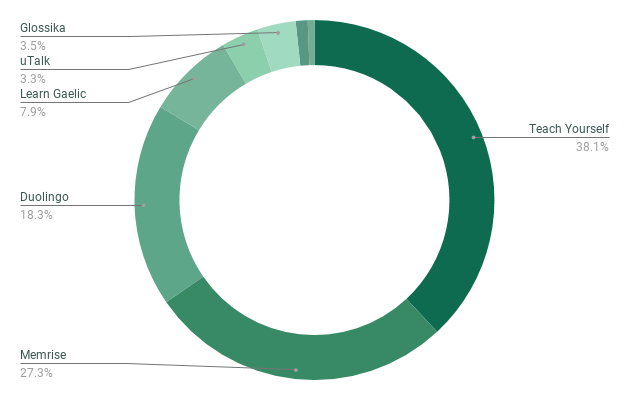 Memrise definitely took a jump this week, as I pushed to try and get my Memrise deck and Duoling tree at an even pace. They’re not there yet, but I do feel better about the words I’ve learnt from Duolingo.

(Except for the clothes ones. They just won’t stick!)

Glossika also increased a little—all apps were actually up these past six days as I had an unfortunate accident involving my water bottle that took my language notebook out of action for a few days. (And my Kindle, too, but that might be dead now, boo!)

The one thing I didn’t really try out were any native materials—I had a quick look for children’s books in Gàidhlig yesterday, but couldn’t find any free ones to have a look at. That’s the only other thing I would have liked to see if I could do anything with, just because it would have been a bit of an ego boost if I could read anything!

Next, I’ll be moving onto Ainu—a language that I’ve actually written about before. I’ll put up another post about Ainu in a few hours (and try and get some studying in today)!