Hey guys! I hope everyone’s well and I hope, at least for some of you, that summer has well and truly arrived. It certainly hasn’t here. Of course, as usual, it’s that time of the month where I set out my goals for the next 28-31 days and take a look back at how the month before has gone. June was an… interesting one. 😉 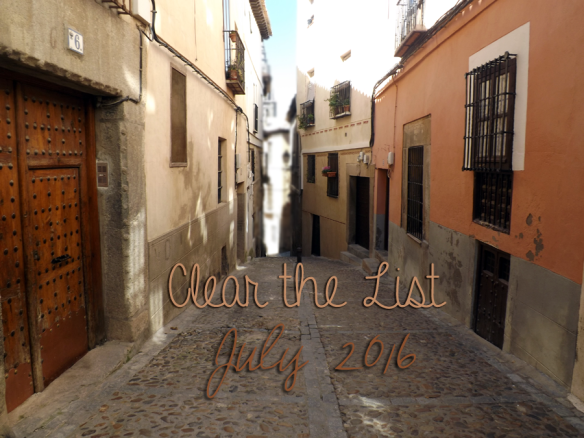 So, first things first: a lot of things happened in June. I didn’t get anywhere near as much done as I’d hoped to, a combination of moving home (aka going to see everyone for the first time in five months, trips out and about, etc.); desperately searching for a job (aka getting rejected a LOT) and losing all motivation after the referendum stuff last week.

Still, I’m getting myself back together now – and I think I’m off to a good start – so I expect July to be much more fruitful than June was. I also spent a few days there thinking long and hard about this blog (not about shutting it down; I have no intention of doing that), about what I want it to be and where I want it to go in the future. I have lots of ideas, but I need to get around to implementing some of them.

But I will talk about that a little later; for now, let’s look at what I aimed for last month.

So, what does that mean for July?

I’m hoping to read six books and watch six films for each language this month (300 pages/9 hours), with the priority being getting through the German stuff pretty fast and then working hard on the Mandarin. (Spanish sort of plods along anyway and will increase as my knowledge does.)

As for the New Year’s Goals: I’m not going to write a massive breakdown here, but suffice to say, I am working on it. I’ll keep track this month and let you know how it went at the end of July.

Okay, so there’s my goals. As for the blog, I will say this: there won’t be a Super Challenge post this month, as I did absolutely nothing that counted towards the challenge last month. So you’ll see that again in August. I want to bring back some of the series posts I was doing (think German readalong) and I want to put some new series in place, though some of them will be monthly posts.

I am also excited to say I’ll be going to the Open University’s LanguagesMK Show in Milton Keynes next Saturday (9th July)! I really can’t wait so if you’re going, come find me! I’ll be at some taster session or lecture most likely, but I’m not getting my coach back home until a few hours after it finishes, so I’ll be about for a bit. Can’t wait to try out some Polish, too. 😀

So yes, that’s it for this month’s Clear the List post. See you this time next month!

(And, as ever, if you fancy joining the Clear the List linkup, here are the rules:

3. Follow the hosts: Esther from Local Adventurer, Lindsay from Lindsay Does Languages, Mariah from Food, Booze & Baggage, and Shannon from Eurolinguiste.