Hi guys! I’ve been a little lax again, I know, but hey, it’s the keeping going that counts, right?

Anyway, it’s time for us to move onto the letter K and the language Karelian. I actually hadn’t heard of Karelian before I started doing the challenge (I hadn’t heard of most of these languages, but hey ho) – it was suggested to me on Twitter by Serpent (@serpent849), so thank her for what you’re about to learn I guess! (And follow her if you’re interested in a good chat about languages; she’s learnt more than a few.) 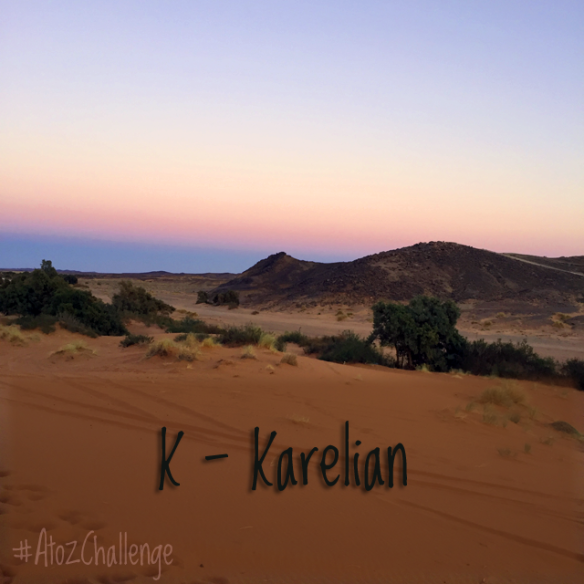 Karelian (karjala, karjal or kariela) is a Finnic language spoken by 20,000-35,000 people (Lewis, 2016; Moseley, 2010) in Russia and Finland, though mainly in the Republic of Karelia, which is located in the north-west of Russia. It is classified as being definitely endangered (Moseley, 2010). Russian is the only official language of the Republic of Karelia at this time, and although there have been suggestions that Karelian should be the second official language, it remains, along with Veps and Finnish, as a recognised “national language” (Wikipedia, 2016).

According to Moseley (2007), one of the most important factors when considering the survival of Karelian is the language that is currently used in the home. Many Karelian speakers, as a result of stigma, have switched to using Russian, which means that the number of Karelian speakers has, of course, decreased. However, as there is so much work being done to attempt to preserve and revitalise Karelian, this idea of language maintenance cannot be ignored and the speakers “end up in a state of collective self-betrayal where the language is claimed to be in active use in families while everybody knows that this is not the case.”

A similar situation has been occurring in Finland as well, according to Sarhimaa (2010). In post-war Finland, Karelian was a language viewed with suspicion and Finnish was the language promoted outside of the home. Until recently, there were no efforts to maintain the language and, in fact, “the prevailing majority of Finns is to a very limited extent aware of the existence of Karelian as a language in its own right and of the Karelian speaking majority in Finland.”

It is encouraging to note, however, that in recent years, attitudes have begun to turn – at least for the Karelians in Finland. In Finland, there has been an increase in learning materials and there are also some Karelian-language authors and documentary films. There are also language nests in Finland – areas where older speakers of the language teach it to children – thus strengthening intergenerational transmission. In Russia, Karelian is taught in schools in Karelia, so there are learning materials, the same as in Finland, as well as television programmes and radio programmes – but there has been “a decrease in number of students of Karelian since 2002” and “the right to learn the heritage language is enjoyed in practice by only about a quarter of ethnic Karelian schoolchildren in the Republic of Karelia.” (Klementyev, 2012)

Hopefully, those methods that do appear to be having some positive impact on the maintenance and revitalisation of Karelian in Finland could also be applied to Karelian speakers in Russia in the future. Although there are still many speakers of the language, this rift in intergenerational transmission will only lead to decreases in speakers and so it is important to try and prevent that now, before there are too few speakers left for maintenance work to be effective. However, the fact that there are many speakers living in different countries where different attitudes seem to prevail may have some lasting impact on how the language is viewed and will therefore impact any maintenance or revitalisation efforts – and, through that, the longevity of the language.

Klementyev, Y., Kovaleva S., and Zamyatin K., 2012. The Karelian language in Russia: An Overview of a Language in Context. Working Papers in European Language Diversity, 12. Available from: https://fedora.phaidra.univie.ac.at/fedora/get/o:105164/bdef:Content/get. [Accessed 22 April 2016].

Sarhimaa, A., 2010. The Karelian Language in Finland: An Overview of a Language in Context. Working Papers in European Language Diversity, 3. Available from: https://fedora.phaidra.univie.ac.at/fedora/get/o:102613/bdef:Content/get. [Accessed 22 April 2016].

YouTube (I Learn All Languages): Learn Karelian # From 0 to 9