Hi, guys! So you might have seen me do this last year, but in case you didn’t: today is Multilingual Children’s Book Day! Basically, this is a day founded by Valarie Budayr and Mia Wenjen to celebrate diversity in children’s literature–and they do this by connecting bloggers (and, this year, Instagrammers, YouTubers, and people on Twitter and Facebook) with books and authors so that we can spread the word about these books.

So, with no further ado, here’s the book I’m reviewing this year. 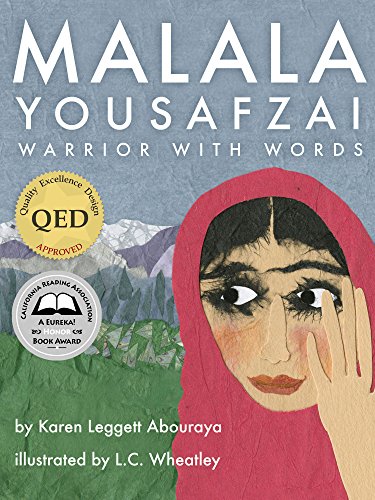 The inspiring, true story of Malala Yousafzai, a young Pakistani girl who stands up and speaks out for every child s right to education. Though she and two of her schoolmates were targeted by a Taliban gunman, a life-threatening injury only strengthened her resolve. Malala spoke at the U.N. on her 16th birthday in 2013, nine months after she was shot. Author and journalist Karen Leggett Abouraya, author of Hands Around the Library: Protecting Egypt’s Treasured Books, brings Malala’s story to life for young readers. Malala’s story is more than a biography of a brave and outspoken teenager. It is a testament to the power of education to change the world for boys and girls everywhere. “Winner of the California Reading Association’s 2015 EUREKA! Honor Award”

I think most adults have heard of Malala and so I don’t really need to recap the story for you–Leggett Abouraya tells it well, explaining what happened to Malala before she was shot on the bus and it’s nice to learn more about this brave girl and her family. Despite the fact that it is recommended for ages eight to eleven, I think the parts that we might recognise as darker are handled well (the language is straightforward and fairly simplistic) and the fact that Malala is real may capture their imaginations, in some ways, more than a fictional heroine could.

The book is also beautifully illustrated (I love the style of the kind of collage-y pictures!) and, on Amazon, there are versions available in German and Spanish, which, considering the language used, would work especially well for intermediate students or, if you had both books, as a kind of bilingual reader. It would also be a useful book if you want to teach your children/students about Malala, Pakistan, the rights of women or children globally, and about citizenship and their place in their own community.

It might be interesting to compare students’ views on their education before and after reading this book. (However, I have done this–without the book, just asking them–and you will still get students who say they don’t want to come to school, regardless!) Ask them why they think Malala thinks it is so important to go to school? What would the girls do if they came to school and were turned away? What about the boys? For the older students, ask them what this would mean when they were older; how would it be different to what they might do now?

Malala also wrote a blog about her life in Swat Valley when the Taliban came–it was this blog that caused her to be targeted in 2012. Get your older students to try writing their own blog (maybe not online, just in an exercise book or on Word) about their school experience or the book and then, if they enjoy it, let them carry on! It could be a fun thing to do once a week/fortnight for those who want to.

Also, for those of us in the UK: it might be especially useful to use this book as a starting point to talk about Pakistan and British Pakistanis. The UK has the largest Pakistani community in Europe and this could be a chance to talk about diversity here, so maybe see if it’s possible to spend a lesson (or preferably a few) talking about the country and its culture. Odds are, the students will really enjoy learning something new–you could even get them to make posters about what they’ve learnt that can be used to inform students in other years.

I hope you enjoyed this and manage to check out the book!

Just a few more things before I go:

Multicultural Children’s Book Day 2017 (1/27/17) is its fourth year and was founded by Valarie Budayr from Jump Into A Book and Mia Wenjen from PragmaticMom. Our mission is to raise awareness on the ongoing need to include kid’s books that celebrate diversity in home and school bookshelves while also working diligently to get more of these types of books into the hands of young readers, parents and educators.

Despite census data that shows 37% of the US population consists of people of color, only 10% of children’s books published have diversity content. Using the Multicultural Children’s Book Day holiday, the MCBD Team are on a mission to change all of that.

We’d like to also give a shout-out to MCBD’s impressive CoHost Team who not only hosts the book review link-up on celebration day, but who also work tirelessly to spread the word of this event. View our CoHosts HERE.